I don’t know about you, but we just can’t get enough of the #RoyalWedding… The wedding of Prince Harry and Meghan Markle was held this past weekend at Windsor Castle in the United Kingdom. The groom, Prince Harry, is a member of the British royal family; the bride, Meghan Markle, is an American former actress. While fairytale castles may be more associated with the United Kingdom these days, we’re riding the #royalwave a little longer…

ENJOY THE ROYAL TREATMENT AT THESE BEAUTIFUL AMERICAN CASTLES

Think you need to hop a flight to Europe to see some truly awe-inspiring castles? Well not so fast! There are actually at least a dozen amazing castles dotted all around America that are absolutely worth a visit on your next vacation or road trip.

What makes these castles so fascinating, besides the obvious of course, is the great storied history of these castles. Many were built in the 1800s and early 1900s by very rich industrialists and some were even pre-built in Europe and sailed over to America by boat.

Each castle has its own story, but the good news is the vast majority of these are open to the public for visits and tours. Let’s take a look at some of our favorites. 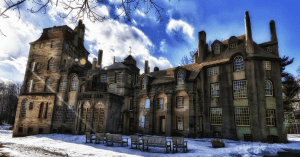 Home to archaeologist and ceramicist Henry Chapman Mercer, Fonthill Castle was also used to house and showcase his collection of decorative Moravian tiles and prints. The building was designed by Mercer himself, drawing on Medieval, Gothic and Byzantine styles, and completed between 1908 and 1912. When Mercer passed away in 1930, he had willed the estate to his housekeeper Laura Swain and her husband to live in and run as a museum. In 1975, Fonthill Castle was passed on to the Trustees of the Mercer Foothill Museum who elected to continue operating it as a house museum. Visitors can explore the building and museum on one-hour-long guided tours, which are conducted on a daily basis. Reservations are highly recommended.

Located in on the edge of the Hudson River in Tarrytown, New York, the Lyndhurst Mansion is the creation of acclaimed architect Alexander Jackson Davis who built the beautiful mansion in 1838. Said to be one of the finest Gothic Revival mansions in the nation, Lyndhurst has had several noteworthy residents since its construction including New York City mayor William Paulding and railroad tycoon Jay Gould. Tours of Lyndhurst Mansion – including its Art Gallery, home to paintings including French artist William Bouguereau’s 1866 work First Caresses – are available on Fridays and weekends. 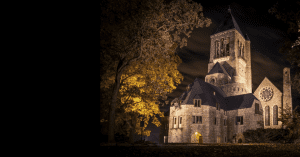 The home of Raymond and Mildred Pitcairn, Glencairn was built between 1928 and 1939 in the Romanesque architectural style. In addition to being their primary residence, the building housed Pitcairn’s own collection of medieval objects. As lifelong members of the New Church, it was unsurprising that the Pitcairns willed Glencairn to the Academy of the New Church after they passed away (Raymond in 1966 and Mildred in 1979). The Academy decided to move its own museum (Academy Museum) into Glencairn, combining its collection and that of Pitcairn in one place. The first floor currently operates as a center for culture and social events, while the other floors are used as museum galleries.

Perhaps the most famous castle in the United States, the wealthy newspaper, and magazine Hearst family wanted something in the California countryside for family gatherings. Almost 80,000 square feet later, Hearst Castle wasn’t completed until the mid-1900s. The grounds and castle are now a state park of California, so feel free to stop by and visit. 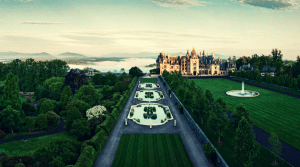 Another famous castle, modeled after a French chateau and tucked into the hills of Asheville, North Carolina is The Biltmore. Built by the very famous and wealthy Vanderbilt family it has over 250 rooms! What’s more amazing is it is still privately owned, but the owners still allow for multiple tours a day through the buildings and the beautiful estate. 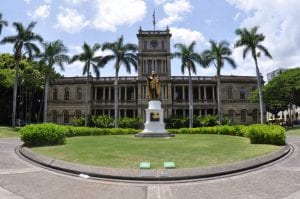 The only true royal palace in America is located in Honolulu, Hawaii. Built in the late 1870s this palace was the home of the last King and Queen of the Kingdom of Hawaii before it became claimed as American territory. The ‘Iolani Palace is now run by a not for profit group that offers a museum and tours as well as special celebrations on the King and Queen’s birthdays. 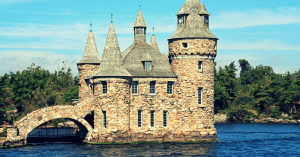 This castle is home to a true love story. George Boldt commissioned this castle to be built as a tribute to his wife, though sadly she died just before the Boldt Castle was finished. So overcome with sadness George ordered the building to cease and left the castle to become ruins. In the 1950s New York state paid to restore the castle and the island, it sits upon. Now visitors can take self-guided tours of the castle and island. 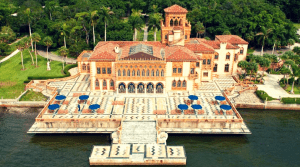 This Mediterranean style home was built to replicate the grand castles surrounding the hills of Venice by famous circus magnate John Ringling of the Ringling Brothers. Located in Sarasota, Florida the Ca’ D’Zan has been cited as an example of one of the very last of the mansions built during the Gilded Age. Visitors can tour the castle, grounds and art museum. 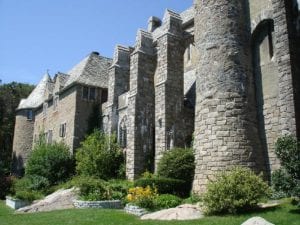 Inspired by his time living in England as a child where he fell in love with its castles, American inventor John Hays Hammond Jr. built the beautiful Hammond Castle between 1926 and 1929 overlooking Massachusetts’ scenic Gloucester Harbor to act as his home and laboratory. Constructed from a mix of local stone and various Roman, medieval and Renaissance-era artifacts Hammond had collected during travels to Europe, Hammond Castle is now a museum with visitors free to tour its enchanting rooms like the beautiful inner courtyard, partly made from medieval storefronts Hammond found on a trip to France.

BLVD Sarasota, is a new luxury condominium located in the heart of the Rosemary District. If you enjoyed this article, sign up for our e-newsletter here for all things Sarasota!