If you ask anyone where the best spot in Sarasota is, they’ll each have a different answer. The city is split into many diverse neighborhoods, making it easy to explore a new part of town, experience a change of pace, or find something really rare and unique. Whether you like the hometown atmosphere of Gillespie Park or the upscale living at Laurel Park, you can find your favorite lifestyle in Sarasota.

The one word that best describes Gillespie Park is ‘community’. Made from the combined efforts of individuals and civic groups, this neighborhood features a popular butterfly garden and a great children’s playground. Make sure to take furry friends by The Canine Club for some fresh air, or visit the Historic Downtown Village Shops for quaint architecture and unique art finds.

If you’re looking for the perfect Florida beaches to share with family and friends, look no further than the white sand beaches of Siesta Key. Highly regarded for its award-winning beaches, TripAdvisor once again announced Siesta Key Beach as Number 2 on its ‘Top 10 Beaches in the U.S.’ list, and Dr. Beach has announced Siesta Key Beach as their number one beach of 2017. It’s a great place to watch porpoises frolicking in the Gulf of Mexico or get in a morning workout on the beach. Once you’re done soaking up the sun, head to Siesta Village for Bonjour, a French café that makes a great espresso, or check out Created Gems for a locally made piece of jewelry.

Laurel Park represents a way of life that was thought to be long gone. In this neighborhood, you’re surrounded by oak trees dripping with Spanish moss and buildings dating to the beginning of the 20th century. The residents of this neighborhood are so committed to the preservation of their historic buildings, that many of them are listed in the Laurel Park National Register Historic District. The shopping here is unparalleled, with eagle-eyed shoppers having found everything from high-end designer brands to vintage items from the 1900s and onwards in stores such as The Exchange and Asparagus.

This neighborhood is the heart of Sarasota’s arts and culture scene. Its vibrant history, dating back to the first residents of the area, has drawn in artists and art purveyors of all kinds. You’ll often find them at the Florida Studio Theatre or at the Art Center Sarasota. Although, no matter where you turn, you’re sure to find something creative!

There are big things ahead for the Rosemary District. The area’s bayfront has been recently approved for redevelopment and will serve as the home for a future entertainment complex – ‘The Bay’. The recently approved plans intend to create a new social centerpiece to serve as the heart of Sarasota’s waterfront arts and entertainment district. Another future development, the Quay Sarasota, will offer dining and shopping immediately across the street from BLVD in the Rosemary District.

Also located in the Rosemary District BLVD Sarasota has become one of the areas’ most desirable new address. Construction is now well underway and homes will range from 3,550 to 5,500 sq. feet. Start at $1.9 million, each home will enjoy panoramic city and/or bay views. Residents are accommodated with an unprecedented array of amenities, ranging from a zero-horizon rooftop pool that overlooks the city and the bay to a large temperature-controlled wine vault with private lockable showcases. On the fifth floor, this dog-friendly home has a BLVD pet lawn as well as a grooming station for your four-legged friend.

Right around the corner, residents can enjoy Sarasota’s world-class entertainment, museums, art galleries, and restaurants. Not only that, world-renowned chef Sean Murphy recently announced his new restaurant that will be located on the first floor of BLVD Sarasota. It is no wonder why residences are nearly halfway sold out.

Due to construction progress, our new sales studio is now open, featuring your in-person virtual reality experience at 1266 1st Street, Suite 5, Sarasota. Call our client liaisons at 941-316-1499 to schedule your tour today. Download our Digital Brochure at our website, BLVDsarasota.com.

Even in its downtrodden days, the Rosemary District stood out for its unbeatable location, just a few blocks from downtown Sarasota and the bay. But not until 2014, when the city increased density for new projects in the neighborhood from 25 units to 75 units per acre, did development take off. More than 1,500 residential units are being developed, have been approved or are awaiting approval. A hotel, three apartment projects and 11 condominiums are rising, with some units priced at more than a million dollars. Restaurants, furniture stores and offices are cropping up, and the district was recently rated one of the 10 most walkable neighborhoods in Florida. 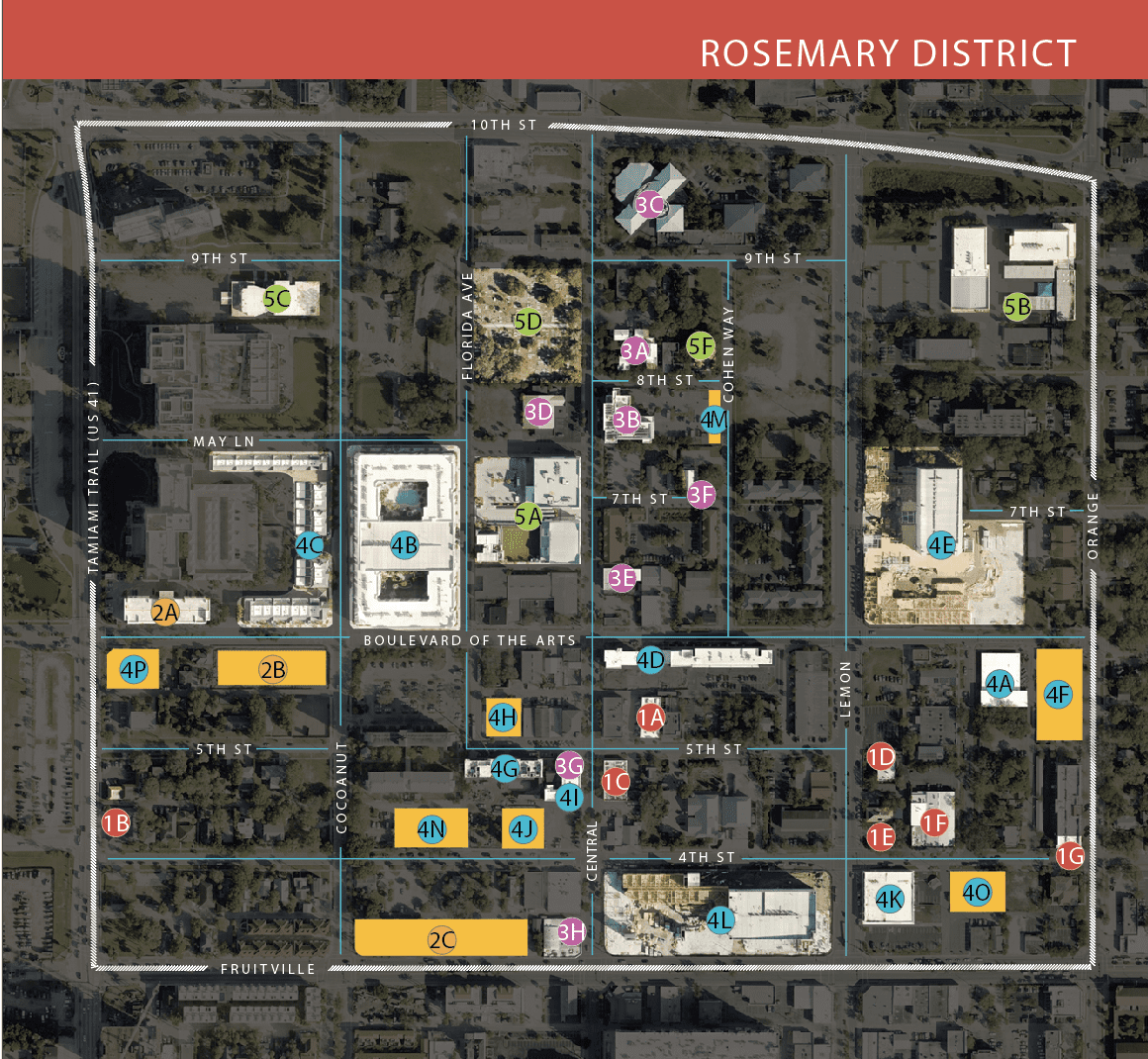 New Developments
4A BOTA CENTER—1570 Boulevard of the Arts. Meticulous renovation of the old Babcock Furniture Store into a center for creatives and their businesses, anticipated completion fall 2017.

4C VALENCIA AT ROSEMARY PLACE—601 Cocoanut Ave. About 30 townhomes under construction, starting in the mid-$500,000s, anticipated completion 2017.
4D ROSEMARY SQUARE—1440 Boulevard of the Arts. Three-building campus includes a condominium of 30 residences (all sold to the Sarasota Opera for artists) with retail and office on the ground floor; a building with studio space for The Players and Sarasota Contemporary Dance; and a building with two restaurants; anticipated completion January 2018.