May is the last month of the season to enjoy these succulent Florida crab claw which provides some of the sea’s rarest, sweetest treat.

Michael O’Leary throws a blue-gray crab into an orange plastic laundry basket in his just-for-business fishing boat. The red-bearded fisherman closes the slatted boxlike trap from which he took the crab and with a decisive flick flips it back into the water. Behind the wheel at the back of the boat in a pilot’s cabin, the grizzled, tattooed skipper heads for the next trap, where he clamps a big hook hanging from a pulley onto the line he has been following and sets the pulley’s motor running. The trap appears from the deep, pulled up fast, like a phantasm heading at you from the screen of a science fiction movie. O’Leary steadies it and sticks his wet, muddy, cotton-gloved hand into the top to pull out three angry crabs. He tosses them into the basket and turns to the visiting passengers. “I know y’all didn’t come out here to do this all day,” he says. “It ain’t that fun.” 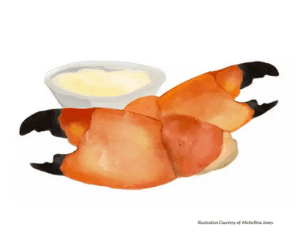 Fun is what draws most people to O’Leary’s part of the world—Longboat Key, off Florida’s western Gulf Coast. But a few people work here, too, and not just at the condominium complexes, hotels, and golf courses that have taken over this long, narrow strip of land connected by bridge to Sarasota. O’Leary, for instance, makes his living catching some of the rarest and best-tasting delicacies in the sea: stone crabs.

The Florida stone crab (Menippe mercenaria) is a curious breed. It is found in the United States along Florida’s Gulf Coast and up the Atlantic coast to North Carolina and is in season only from October to May. Its flesh is far firmer and meatier than that of its relative the blue crab; most people compare it to lobster. Only the claw meat is eaten (unlike some varieties, stone crabs have no back fin meat).

Though a few large-scale fishermen catch many thousands of pounds per season, stone crab is still mostly the domain of small entrepreneurs like O’Leary—fishermen who work long, hard days with just enough help to lay and pull traps. They own their own boats and pay their own insurance and labor costs. Luckily, a large number of people are hungry for stone crab, and thus the market is assured. So, to a greater degree than with most wild seafood, is the yield: Farsighted laws passed by the Florida legislature in the 1970s have helped preserve the stone crab population. Even the most tenderhearted shellfish lover can feast on stone crab claws with hardly any guilt because the crab grows itself another claw and barely notices the loss—or so the restaurants tell concerned eaters.

On land, it is illegal to possess a whole stone crab, even a dead one.

The truth is that an adult crab can regenerate claws, just as it continually grows new shells during its frequent moltings. But the regeneration isn’t as much a matter of course as the sellers would have you believe. The claw must be snapped off at the right place in an expert motion by a fisherman, who must puncture its joint with a sharp probe in the right way or precisely snap it, forcing the crab to contract its muscles and shed its claw cleanly. Florida law specifies the length of the claw that may be taken and dictates that any egg-bearing female be thrown back unmolested. At sea, every crab, declawed or not, must be immediately returned to the water after its claw is removed or held in a shaded place and wet down every half hour before being thrown back. On land, it is illegal to possess a whole stone crab, even a dead one.

These regulations, in addition to the fact that attempts to farm-raise stone crabs have failed, ensure that the business still enjoys a coziness rare in the United States. The few restaurants that stake their survival on the stone crab are family-run, and the fishermen all know one another.

How to Eat Florida Stone Crab

The name aficionados know is that of Joe’s Stone Crab, in Miami Beach, which began cooking and, more important, publicizing stone crabs in the 1920s. Joe Weiss, one of the many Jewish immigrants drawn to the area for its climate, opened a lunch counter in 1913 and, as part of the period’s increasingly widespread flouting of the Jewish dietary laws, served local shellfish. Joe’s takes credit for discovering the best way to cook and serve the claw: boiled and quickly chilled, so that the meat easily slips free of the shell instead of sticking to it. Moreover, the meat has a finer and clearer flavor when served cold. Joe’s has lines out the door during fishing season for its dinners of stone crab with hash browns, and it pioneered the retail shipping of cooked chilled crab claws.

Joe’s is not the only game in town. There’s The Colony, a Longboat Key resort whose annual stone crab fest draws hordes and whose kitchen offers sophisticated stone crab dishes. Then there’s Moore’s Stone Crab, a smaller piece of Americana, less famous but just as authentic, where O’Leary takes his catch.

Moore’s—at the top of the Key, farthest from Sarasota—is the kind of family-run shorefront spot that has barely survived in a fast food age, a place where diners line up at a screen door on the wooden veranda to record their names, then walk down to the water and wait. It’s Longboat Key as it was before rich retirees and tourists drove outworking people.

Moore’s is the real thing, with paper menu placemats showing its blocky logo of a stone crab. The specialty is boiled and chilled claws served with mustard sauce, lemon, and nothing else. The restaurant uses about 200,000 pounds of claws a year—a third of the annual total at Joe’s and a fraction of Florida’s yearly average of about 3.5 million pounds.

A crab fisherman lays traps 10 days before the season begins, the first date it is legal to do so. He may attach as many as 400 traps to a line. Stone crabs are unpredictable, even whimsical, in their movements, and traps that are nearly empty one day can hold six or seven crabs—a very healthy number, fishermen say—just three or four days later. With an extra man and a skipper, a fisherman like O’Leary can pull 500 traps a day. The rhythm is fast: traps clatter against the boat and then slap the water as O’Leary throws them back, still tethered to the line. When the basket is full of crabs and a bait box beside it filled with mullet and other small fish, it’s time to go back in.

This is when O’Leary gets busy, removing claws and throwing the crabs back in a steady stream as the boat speeds home. At Moore’s dock, a worker helps carry in the crate of claws. The kettle—a stainless-steel industrial-size one—is boiling. A wire basket full of claws, held by a pulley, is lowered into the water. The claws cook for about ten minutes. The winch pulls the claws from the kettle, and they trundle above a large rectangular stainless-steel vat of ice. A jerk of the rope dumps the cooked crabs into the vat. The chilled claws go either into boxes in the refrigerator, to be packed for shipping, or onto plates.